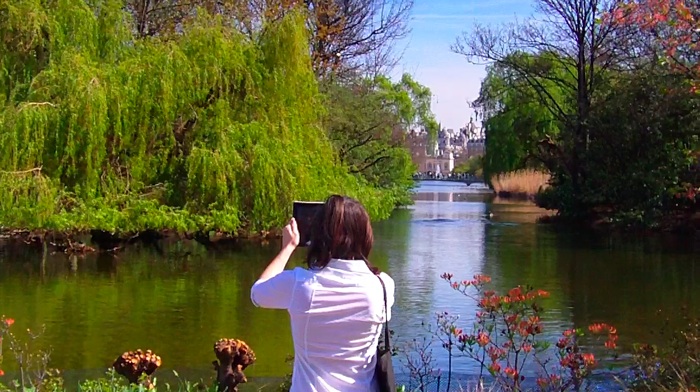 Yesterday we set ourselves the challenge of remaking the entirety of Heart of an Empire (1935) from the British Council Film Archive… in a single day… entirely on an iPad 2.

We had discovered a digitised version of the film from a previous project, similar to ours, the Colonial Film Archive (http://www.colonialfilm.org.uk/node/471) – which was a nice surprise. The film, set in and around St. James park, reenforces the importance of green space and the importance of the buildings that surround it. Being based at the British Council that also overlooks the park (the very first shot is from our office window), and it also being an extremely sunny day, we set out.

One thing we’ve been interested in developing as part of our social outreach programme is filmmaking as tool for education. We’ve discovered the simplest and most economical way to do this is with the iPad 2. As one device that offers one-push filming and the relatively easy editing with the iMovie app, we feel confident practically anybody, of any age, with a brief bit of guidance, could make a film in a day. So logically we should test this out on ourselves first.

The film compromises of 67 shots. We aimed to re-film them as close as possible to the original. Not having a zoom function, not having access to certain places, not having a King, let alone, it not being the King’s birthday, some of the buildings no longer existing, and some very lazy pelicans, made some of the shots difficult to get. The shots we were unable to get, unless a satisfactory modern reference could stand in, are left black.

In terms of editing, the iMovie app is incredibly easy to use, though could really benefit from having a timeline. In order to get our edits to sync up as close as possible, we had to calculate the length of each individual shot, and just hope for the best. Click here to see a side-by-side.