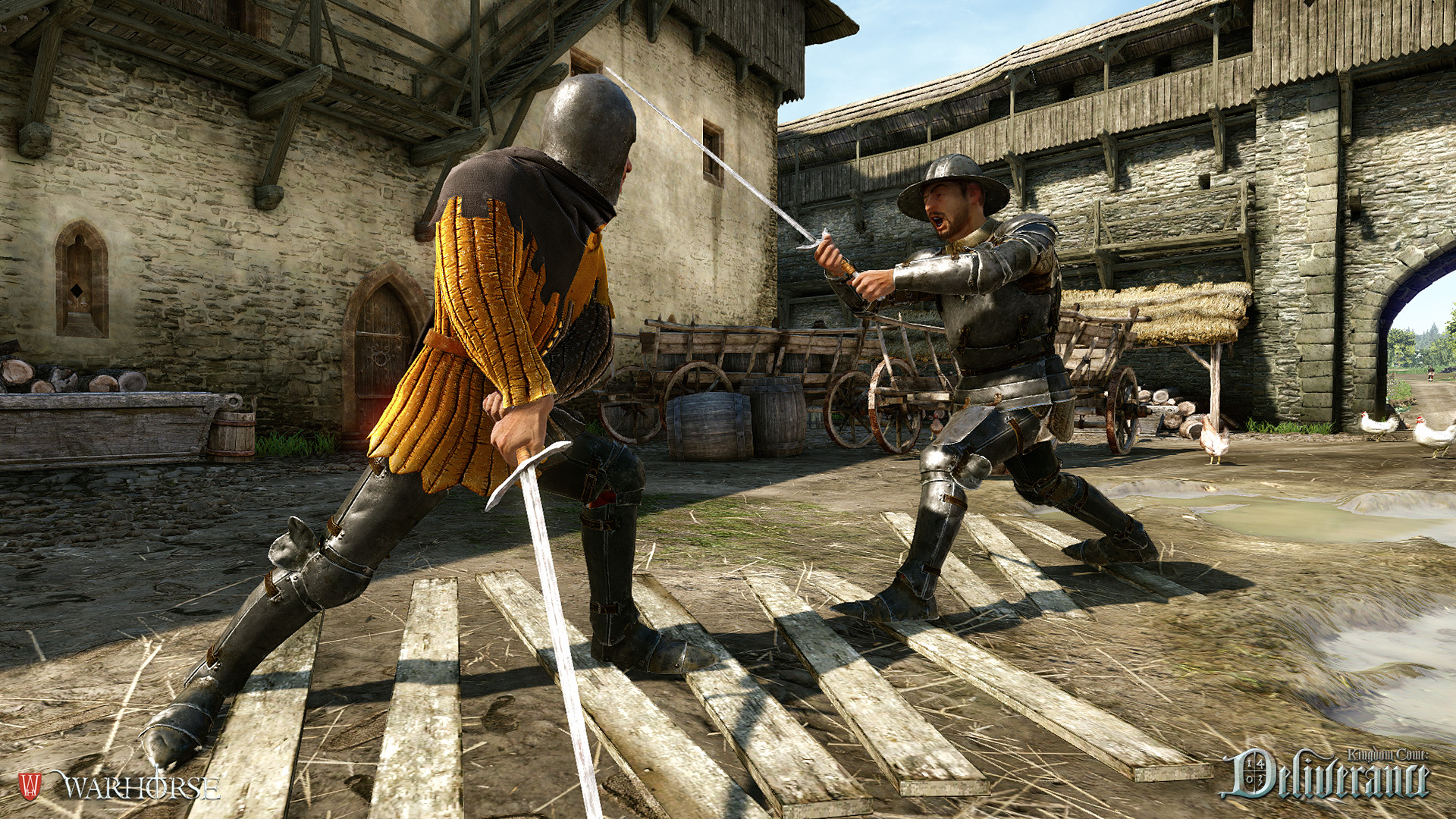 Games are, as a rule, fun, interactive learning mechanisms. What you’re learning isn’t always complicated, but you are nonetheless learning[2] — even if it is just when to burn the rope. That said, it’s now more common for games to have higher aspirations, to impart a little real-world knowledge, however indirectly. Often, this relates to history.

New (and already popular) release Apotheon, for example, is inspired by Ancient Greek history. The wonderful visuals are drawn from Greek pot paintings, the plot derived from mythology, and the in-game weaponry all appropriate for the Bronze Age setting[3]. As the press for the game says[4],

“Learn a little about Greek Mythology! Apotheon tries to stay true to its source material. Read an excerpt from the Iliad about Diomedes before you stick a Xiphos through his Aspis.”

Whilst it’s a very stylised way to learn a little history, it’s nonetheless a rather enchanting one and reportedly quite immersive.

The Assassin’s Creed games strive to give a more complex and ‘realistic’ view of the past. Generally set in cities with rich histories — 12th century Jerusalem, 15th century Florence, 16th century Constantinople — the games utilise those histories, building real historical figures and events into the narrative and setting them in virtual cities that are passable facsimiles of the real-world counterparts at those points in history.

This latter part has been one of my favourite things about the series; the city layouts are roughly based on real maps and the buildings accurately recreated. Or so one might think. Assassin’s Creed II is actually packed with anachronisms.

“… the stonework on the cathedral’s façade is incomplete. Although this reflects the unfinished state of the cathedral in the Renaissance, the façade under construction in Assassin’s Creed II does not resemble the partial façade that was on the cathedral in the fifteenth century. Instead, it recalls the nineteenth-century structure that millions of tourists see when they visit Florence today. In this instance, the fictitious point of origin in enhanced by the fact that the gamer witnesses the façade being built in the fifteenth century of the game. Unless otherwise informed, a player would interpret the construction project represented in the game as a reflection of the actual history of the façade…” 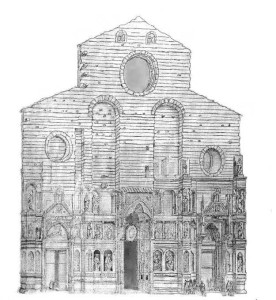 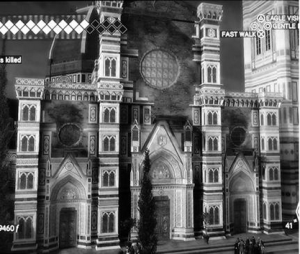 The façade in Assassin’s Creed II 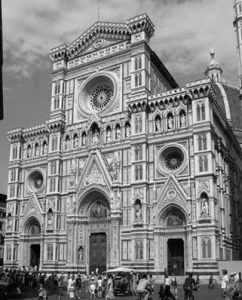 I myself assumed it was an accurate depiction until I researched it. What a peculiar decision on the part of the game’s designers! Why create such an odd hotchpotch of the 15th century and 19th century façades?

Regardless of the motivation, this demonstrates the power of games to mislead as much as educate. It’d be easy to assume everything we see in Assassin’s Creed II is accurate, particularly given the info boxes that pop-up whenever one nears a renowned building, giving us little history lessons.

That said, perhaps it’s not fair to pick on these anachronisms. Recreating historical cities is ambitious, and the Assassin’s Creed franchise isn’t exactly focussed on historical accuracy anyway[6] — that’s not what the games are about. Upcoming game Kingdom Come: Deliverance is a different story, though.

Kingdom Come: Deliverance, due to be released later this year by Warhorse Studios, is a role-playing video game, set in the 15th century medieval Kingdom of Bohemia with a focus on ‘historically accurate and realistic content’. I’m pretty darn excited about this. At least one chunk of the game’s terrain is closely modelled on the real-world area between Sázava and Rataje nad Sázavou (with some intervening terrain removed for playability[7]), but the main point of interest is the game’s dedication to accuracy in portraying objects, attire, architecture, and even sword-fighting techniques[8]. Accuracy IS its key selling point, and I can recommend the studio’s making-of videos[9] if you’d like to see just how they’re achieving that.

What’s equally interesting is that the game has been largely crowd-funded. As of October 2014, the game had raised over $2 million from nearly 40,000 backers[10]. Whether or not the game turns out to be any good is somewhat irrelevant — what’s important is that so many people are prepared to pay up front for a game based around historical accuracy. There is a market for historical games which, by their nature, educate us about those periods in an authentic way.

There’s also a vast wealth of material — digital assets — that could be utilised to this end. GLAMs everywhere are digitising content, both in 2D and 3D formats. You can now download and print a 3D model of a Hellenic statue[11] with very little trouble, so why not utilise these digitised assets in game environments? Why not integrate them into virtual scenery, virtual narratives? Why not build the Rijksmuseum in Minecraft and line the walls with pixellated versions of their digitised paintings? Why not build a game based around the detection of forgeries?

This sort of collaboration is just one of the ways in which heritage and games can come together in the digital world to utilise digital assets in an educational and genuinely engaging manner.

And this meeting of industries can already be seen. The pioneering British Library Labs now runs an annual competition called Off the Map. This competition challenges HE students to produce a video game based around a specified theme and utilising customised free historical maps/images/audio. The results have been impressive. The 2013 winners — Pudding Lane — made national news with their street-accurate rendering of 17th century City of London (pre Great Fire). Though Pudding Lane didn’t implement it, more recent winners of the competition have designed their virtual world to be experienced through an Oculus Rift, making them truly immersive ways to learn about historical environments.

We can’t expect everyone to have an Oculus Rift (yet), but the popularity of these endeavours (and other heritage-game projects such as British Museum Minecraft) demonstrates that this is a concept with a lot of potential; I’d love to see more GLAMs and game producers approaching each other to collaborate and bring heritage to the increasing gaming audience.

[1] I like boardgames too, but that’s a blog for another day.

[3] Allegedly; I confess I haven’t verified this last part yet.

[6] The sequence where one pilots Leonardo Da Vinci’s flying machine across Venice in Assassin’s Creed: Brotherhood is perhaps a good example of this.

[8] This is really quite pleasing, as the studio has drawn on the HEMA community’s efforts to accurately revive Medieval fencing from historical guides. See the Making of Video #4: Combat

[11] Cosmo Wenman has made a scan of Winged Victory, the Nike of Samothrace available on Thingiverse, for example.