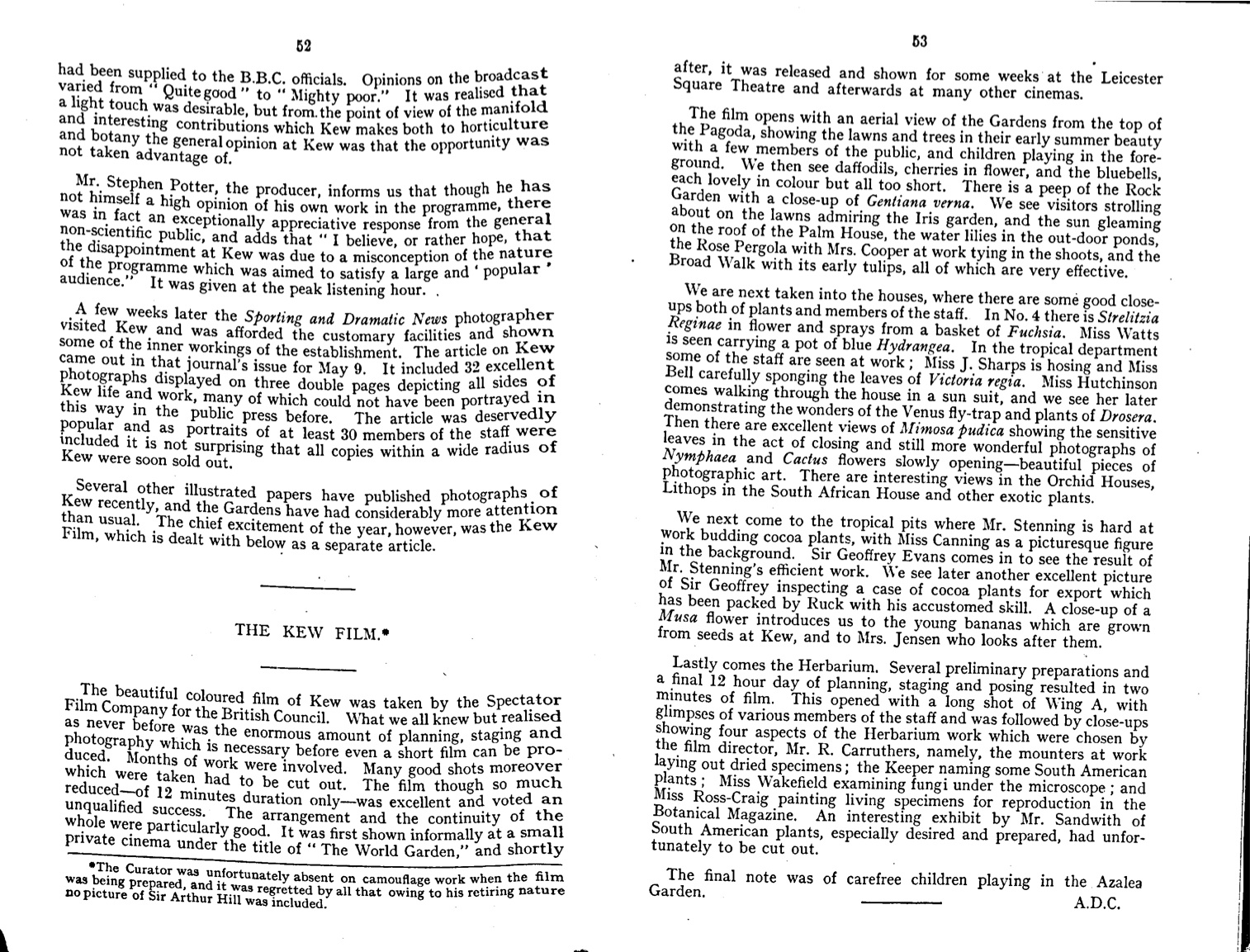 In 1942 the British Council enlisted the expertise of Oliver Bell, the then director of the BFI, to produce a report that passed judgement over the current film output but also made recommendations and suggestions for new material. Bell was not thrilled by the films he saw, claiming that “many of them are competent, outstandingly so, but few of them show originality either in conception or execution”. Bell advised that the British Council needed to be more inventive in their approach to subject matter and film form.

“We want the council’s technique to develop; we seek originality even if it provokes criticism, but originality with a purpose, not merely sensationalism.”

Released the year before the BFI report was produced, World Garden was the film to which Bell and future film productions would refer to as standard. Although its concept is fairly straightforward – an exploration of the grounds and work that commences at the internationally renowned Kew Gardens – the deft use of Technicolor, the bold and vibrant colours, really does accentuate the beauty of the flowers and their surroundings. There’s also an intelligent use of time-lapse photography, where as if by magic flowers blossom right in front of your very eyes. As a result it comes as no surprise that World Garden was privileged with a UK theatrical release, premiering at Leicester Square theatre and then being shown more in widespread parts of the country and world, proving that the British Council were capable of producing informative films full of cinematic flourish.

Likewise, the recent re-discovery of World Garden has arrived at time when the films of the British Council are again being evaluated and transformed. Instead of focusing on technical innovations in production, the films are now receiving the benefits of the technical innovations in distribution, where they are entering the digital age and becoming a publicly accessible online resource. We caught up with Michele Losse, an archivist at Kew, whose chance discovery of an article about the film began its path to being beautifully restored and digitised. The enthusiasm of Kew Royal Botanical Gardens – and their own pursuit of the film in order to unlock a part of the institution’s heritage – was a very encouraging factor for the British Council when they began this project. Without World Gardenin the 1940s, the quality of the Council’s films wouldn’t be what they are; withoutWorld Garden being rediscovered today, we may never have had an idea of just how exceptional these films were.