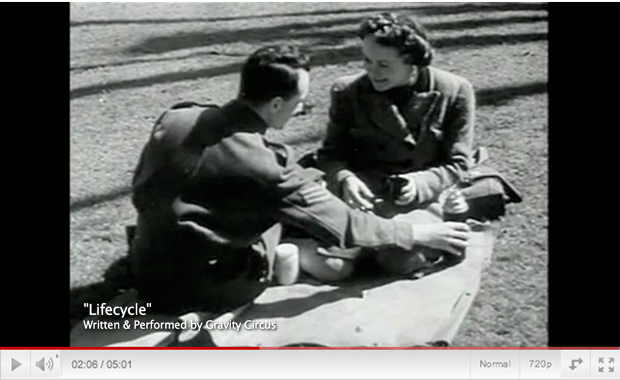 Mike: “As the title suggests, the song is about the life cycle of human existence. It was mostly inspired by the theory of evolution, which I view as this almost magical life force that pushes through every living thing and which dictates our behaviour in a very subconscious or automatic way. It is also a comment on self-awareness and the idea that humans, unlike other animals, may have the capacity to influence evolution not just for humans but for all life on earth.

“Using archived footage of Britain from the 1940’s really helps to bring the whole meaning of the song home. Seeing soldiers in Trafalgar Square alongside children playing in the park, men clearing out a garden juxtaposed with men picking up rubble from a bomb site illustrates how easy it is for a society, even one as advanced as Britain, to descend into primitive in-group out-group struggle.

“What really touched me emotionally was seeing the children evacuated from London, which I hope is what will touch others and help us all realise how important it is to try and guide our evolution towards progressing peacefully through unity rather than struggle.”

Films featured in the video are London 1942, Island People  and History of the English Language.